How to build your wealth bucket using the compound interest effect

In this article, we cover some cogent and mind-blowing facts on how to multiply your money by using compound interest in the forex, futures, and stock market.

How to build your wealth bucket using the compound interest effect

In this article, we will cover some cogent and mind-blowing facts. For example:

I'm sure you are wondering why Albert Einstein would refer to the compound interest effect as one of the few potent forces in the universe and even go further to call it the eighth wonder of the world. The simple answer is because it is true.

No quick fix or Ponzi scheme can replicate the type of stability and increase of compound interest. Let's consider a story of the chessboard and the grain of rice.

A certain Chinese emperor was extremely pleased with the game of chess that he decided to reward the inventor. He was willing to give the inventor anything he wanted, so he told him to ask for anything at all. The inventor had a seemingly modest and straightforward request. He said that he desired one grain for the first square of the chessboard, two grains of rice for the second, four grains for the third, and eight grains for the fifth till the 64th square. Of course, it seemed like an elementary request, but little did the emperor know that the inventor just invoked the principle of compound interest, and by the time he was getting to the 64th square, they would need such a large quantity of rice that it would be enough to cover the face of the earth. Instead of giving the investor all the rice in China, the emperor took his head.

Applying this to a real-world example now, let's assume you decide to start saving 1 penny a day, and you double it the next day. If you continue doubling it, how long do you think it would take for you to have saved a million dollars. I'm sure you think it would be around 10 or even a hundred years since all you started with is a penny. However, if you consistently double it every day, you would have over 1 million dollars in 28days. If we want to be more specific, you would have exactly $1,342,177.28 in 28 days. The principle of compound interest is elementary, and it merely explains the fact that your interest is not calculated only on your initial capital investment but also on the interest it has accumulated over time. It simply means that the interest you earn will also fetch you additional benefit, which will also earn you more interest subsequently.

Wealth Principle 1: Compound interest is a fundamental component in the law of money.

If only a lot of people were educated about this earlier in schools and all, the poverty rate and dependence on government wouldn't be as bad as it is.

We are not saying that we plan to double our money every day, but the principle states that we can double our holding over a specific period. To further expatiate on this, we use a mathematical rule, that is not commonly known, called the "Rule of 72."

Have you considered the effect of compound interest on the future generation? If you as a parent have the training and the tools it takes to invest, imagine investing 80 thousand dollars for your child and allowing compound interest to take its effect over a period of 20 years. Let's say you put $80,000 in a trading account with the interest rate of 12% per annum, even if you didn't add a cent to it after the first investment, you would have $871,404 by 20 years.

The only thing it requires is an initial action, just like the first seed sown. Now bearing in mind that you have been appropriately trained and you now know how to harness the multiplying power of compound interest. You simply have to continue adding extra fuel to the fire to keep the flames burning higher and brighter. If you can increase the interest rate by 0.5% monthly, then your $80,000 trading account would have multiplied into about two million dollars. That is just amazing, and you can do this for your future generation and equip them with the skill to create even more wealth.

Exactly how much money it would have generated at the end of 10 and 20 years are illustrated below. 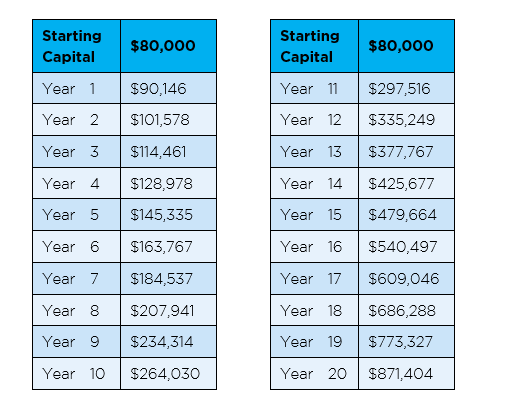 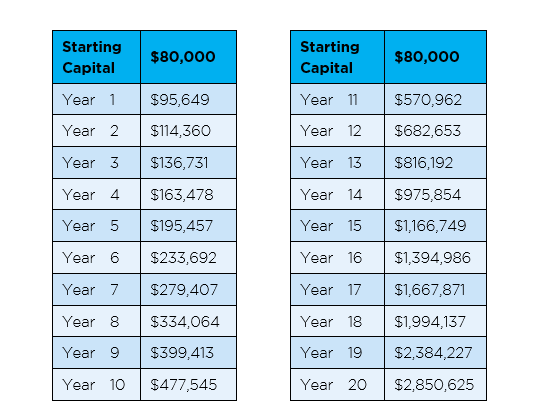 The higher the number of years, the greater the reward and the more exponential effect you'll experience.

Training and skill acquisition has always been emphasized in most of our articles if not all. The idea that one is only truly successful if it happens overnight, that idea is not only misleading but also dangerous. It takes away the reality of success and wealth creation because nobody gets rich overnight: there are processes and sacrifices to be made that might not be visible to those watching from a distance.

The primary ingredient to compound interest is to be patient with the Supply and Demand trading strategy and give your trading account time to grow. Anyone willing to learn, do the work, and be patient can get financially free after some time with the compound interest effect. Here are a few tips to fast track your journey:

By doing this, you can now easily bypass all the commission and ridiculous fee required by mutual funds. There are more negative aspects of mutual funds, but they cannot be discussed extensively in this article. A twenty-year-old investing just 100 dollars in a month at an interest of 15% per annum would have accumulated over 3 million dollars by the age of 60. If you are ready to cultivate the right skills and be diligent, then you can and would be financially free.

Wealth Principle 5: Study and emulate the ways of big institutions by making compounding an inbuilt lifestyle.

Building a trading strategy and developing a plan is a step that is too important to miss. Not doing this opens you up to an enormous amount of loss. At our online trading academy, we make use of the two most fundamental and power factor that drives any market around the world’s Supply and Demand.

It will assist you in identifying and exploiting opportunities in the market. You will learn how to plan and effectively execute plans. The Supply and Demand trading strategy also helps you to stay disciplined and accountable. You also need to apply a high level of restraint to not touch your investment until the right and appropriate time when you have accumulated enough.